Wow. What a crazy couple of days this has been, tacked onto a crazy month or two into the bargain! Sorry for the delay in posting here again, guys, but I sorely underestimated what a stone-cold beyatch returning to school AND writing the final book in the current Jesse James arc was going to be. Between writing, teaching, play rehearsal, not to mention Karen, Rhys, the podcast, etc etc etc . . . it's been . . . interesting. Ancient Chinese curse-type interesting, but interesting none-the-less.

So . . . where was I? Ah yes . . . I'M A PUBLISHED AUTHOR!!!!! How the HELL did THAT happen? On Tuesday I got my Author's Copies (and I thought getting a single 'Contributor's Copy' of gaming books was cool!), and that was one of the most amazing experiences of my life. I remember seeing countless scenes in movies and tv shows of authors opening up their box of author's copies, and I've always fantasized about what that would be like . . . and it SO lived up to my expectations! 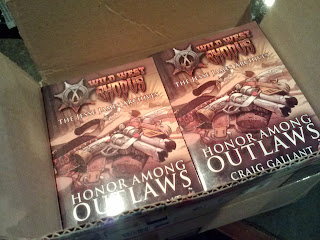 So, the book released yesterday (Tuesday, October 22, 2013), and it was CRAZY fun watching the supply at Amazon dwindle and disappear, resulting in a sold out initial supply in less than 24 hours! I mean, it wasn't a HUGE amount they started with, a test shipment, really . . . but it SOLD OUT! :) And of course, going from 30,020th on Amazon to 9000th in the same timeframe was pretty damned cool as well. I haven't spoken much about it at school, but word got out, and the principal, my friend Brad, sent out an email to the whole district, and now everyone has been congratulating me and wanting to know all the details.

And of course, that's where my head is right now. I REALLY hope this book doesn't suck . . .

And of course, Vincent at Winged Hussar Publishing, the hardest working man in the industry, has been bending over backwards getting this book everywhere he can. We went up on Amazon for pre-orders about a month ago, and now, this week, we signed a deal which should see the hardcopies and digital versions available from Barnes and Noble's website, and hopefully, we'll be in their stores with the new year!

And lest I forget, I received the FIRST copy of the Wild West Exodus Rulebook ever to arrive in America! It's even signed and numbered! :) It looks gorgeous, and it is FULL of stories about all the great characters in this wacky new universe that is evolving even as I type! So, having that in my hands was pretty amazing also.

Many folks have been asking about Honor Among Outlaws and Audiobooks, and negotiations are in the works to try to see that done for the new year as well. In the realm of translation, we are in talks with companies in France, Germany, Spain, Italy, and Poland, as well as setting up a distribution partnership with companies in England and Australia . . . although technically Amazon DOES ship that far . . . but this will save folks lots of money, if they want to go in that direction.

As for Abundant Riches, I finished it a couple weeks ago, and am only awaiting the edited notes back from Zmok/Winged Hussar to incorporate those (I make an alarming number of grammatical errors, I have discovered, for an English teacher . . . ), and address all the little notes in my 'Continuity Notebook', and it'll be done-done! As in my last post, I'm still amazed at how many times I have to 'finish' a book before it's really done! They JUST WON'T DIE!!!!!!!

As the exciting news continues to roll in (hmmm . . . not having any books to sell seems to have hurt my standing at Amazon . . . I've fell down to 10,299 . . . oh well), it looks like my next endeavor will be a two-book story arc, again set in the world of Wild West Exodus. I won't say more for now, as we're still in development phase, but I'm excited (once the damned play is over, anyway), to keep this rollercoaster alive!

I think that's about it for now. I'll try to be better about updates here, especially if any more exciting information comes to light. And of course, against my better judgement, I've been Tweeting quite a bit at @d6gcraig

Until then, everyone be well, and thanks for sharing this crazy ride with me!