So, as I relax in my awesome suite at the Greenville, SC La Quinta (Thanks, Angelo!), I reflect back upon the first day of my first Sci-Fi con . . . and I find that it is good.

The day did not start so well . . . I did not deign to pack the night before, and did not calculate that into my wake-up time, and so was running about 20 minutes late as I tore out the door. I engaged my stopwatch, thinking that I had over-estimated the travel time to the airport, and that would make me feel better . . . except that I was spot on, so no help there. So I walked briskly to the terminal from long-term parking . . . and got there in time to realize that I had forgotten my phone in the car. I RAN back to the parking lot, and then hobbled pathetically back to the terminal (I probably would have been better off walking both ways).  So, panting and sweating like a pig . . . I made it through security only to be stopped at the X-ray machine, where my copy of Firefly The Board Game caused an argument between two TSA agents. One said it was 'only a game', the other said they needed to check. When they saw the box, the woman said "Oh, I know him! He's on Castle! I love Castle!" So they waved me on my way. :) 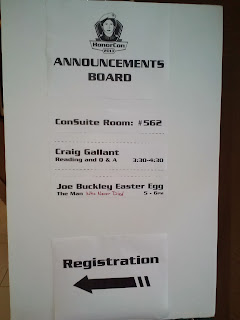 Because I flew Southwest, I was then last to check in, and thus last on the airplane . . . without checked bags, so a carry on suitcase, for the first time in years . . . tight fit, but I made it.

I arrived in plenty of time at the Greenville/Spartanburg aiprort, and drove swiftly to the Hyatt Regency. The great folks at HonorCon allowed me to have a full 150 person conference room with full technical support for a Q&A on the podcast and Honor Among Outlaws. Sadly, there was no time to do any publicity for it, other than my twitter account . . . and this very kind announcement at registration:

Sadly, I just hung out in the room by myself, and then moved on to the next adventure . . . 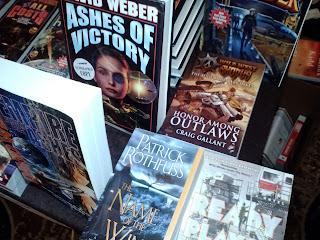 I was then invited to take part in a book signing session . . . except that we were unable to get any of my books to the convention. But the very nice folks from Fiction Addiction offered to sell the two copies that I DID bring , which resulted in this unbelievable moment in my life:

And then inveterate listener and unwitting companion (thanks for the Guinness, Fred!), Fred Kiesche actually BOUGHT one! (And that's Jill, owner of Fiction Addiction and purveyor of very fine books!). 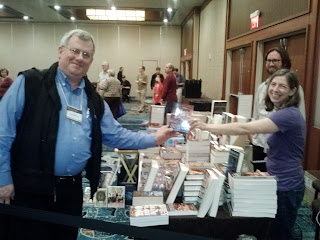 The panel was primarily me and a bunch of very nice folks from BuNine, David Weber's fan-based support committee and the group responsible for the House of Steel Honorverse Companion. They were also the organizers of the Con, and were GREAT to me. Of particularly kind disposition were Bryan Haven and Greg Whitaker. Bryan is the managing partner of  Atlantis Games and Comics. Both guys were WWX backers, and Greg bought my second (and last) book . . . so I sold out, again! :)

Oh, and I adopted one of the last four treecats ever available from the Royal Manticoran Navy Bureau of Supply, and he displayed the novel for me at the signing: 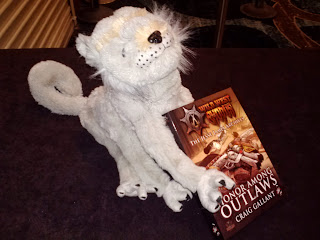 And of course, for the first time I realized that the title of my book might seem a bit strange and misleading in the current venue . . .

After the signing, Fred offered to buy me a Guinness, and my Irish blood would not allow me to say no. So we went to the hotel bar . . . which is AMAZING, and shared a drink and some stories about Raef's randomness and the size of Russ' head.

Then it was off to the Ice Cream Social, where a LOT of RMN costumes were beautifully in evidence, and one uniform from the Manticoran Army. 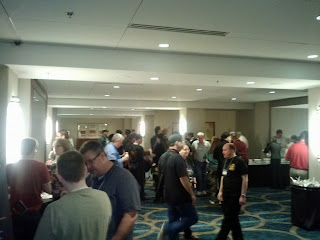 Then came the Opening Ceremonies, where I actually had a seat reserved for myself . . . and again, my yet-to-be-named treecat posed for a picture. 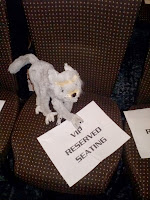 I nervously anticipated having to introduce myself to the entire hall. I made it, though, and actually got to say "I've been a published author for 11 days", and everyone cheered! It was an amazing feeling.

Each of the people on the opening panel spoke, and David Weber ended the ceremony with a nice speech. 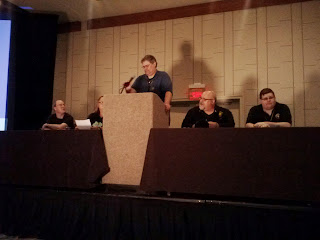 Chris Weuve, former professor at the Naval War College and Toastmaster of the convention, is at the podium, with David Weber to his left.

After the Opening Ceremonies, the big score of the day: Behind the Scenes of the Honor Harrington Franchise . . . where the big plans for the future of the franchise were revealed by David Weber and the folks from Evergreen Studios, including CEO Mike Devlin, Chief Creative Officer Scott Kroopf, Vice President of Gaming and Interactive Richard Browne, Alison Haskovec, VP of Marketing, and Julie Karickhoff, Director of Marketing. I took a ton of pics of the concept work, including the early concept work of the various ships INCLUDING HMS Fearless and PNS Saladin aka Thunder of God, as well as concept art of gravitic wedges, worm holes, and of course treecats . . . and then they told us we couldn't post any pics of the images we saw . . . so you'll have to track me down and ask to see them in person. They even opened a Twitter account JUST for HonorCon . . . which I am not allowed to reveal . . . although if I find out anything cool from it, I'll probably mention it somewhere at some point . . .

We saw the cover of the first graphic novel . . . and I KNOW I'm going to get it as soon as it comes out.

We saw actual game play of the first mobile game, coming out, FREE, in early 2014, and I KNOW I'm going to get that, too. CRAZY cool looking!

And we saw concept artwork of Honor, various settings, and even the Stilties of Basilisk. Some TRULY amazing visuals.

Hope you enjoyed it, guys!