So, here I sit, in the lovely Greenville-Spartanburg 'International' Airport . . . the nice TSA lady told me there was food on the other side of security, so I moved on through . . . only to discover yet again the wildly divergent definitions many folks can have for 'food' . . . there's a snackbar with a microwave and a toaster oven . . .

Anyway, to the Con!

Saturday was another great day. This Con was very well-organized, with only minor glitches, quickly and seamlessly addressed, occasionally rearing their ugly heads. 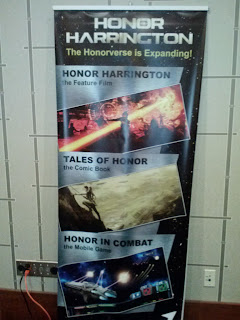 I started my day at the seminar by Evergreen Productions on 'Writing for the Transmedia Honorverse' Another well-put together presentation on the concept of creating an entire franchise, ala Star Wars or Star Trek, from the ground up, intentionally. Comics, video games, novel tie-ins, and of course, the movie. I'm very intrigued by the whole idea, and wish them a lot of luck . . . you can tell they know a lot about not only their own fields, but the Honorverse as well, and are passionate about their project.

I then spent a great deal of time in the vendor hall, hanging out with Pat Doyle, a gamer and member of David Weber's BuNine. He was running a Star Trek Attack Wing campaign using the Fleet Captain game as the map and engine. It was ingenious, and reminded me a lot of Russ.

I kept going over to the Ad Astra Games area, looking at the Saganami Tactical Simulator . . . but there is just SO much math involved with that! I couldn't do it, and my brain kept hurting. My fault, not the fault of the game . . . which always had a bunch of people playing it. 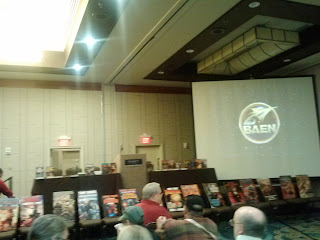 I then attended the Baen Traveling Road Show, David Weber addition. This was a fantastic presentation by the publishing team from Baen, led by Toni Weisskopf. She's the head honcho, there, and obviously does not suffer fools gladly, but gives a great presentation, was very funny and personable, and engaging the entire time. The core of the presentation was a slide show of covers, both of David's books through the ages and other authors. It was very cool watching the evolution of the artists and the covers.

After the Road Show, I attended the seminar on World Building, featuring David and other authors. It was one of the best, and easy to relate to as it was constantly tied into the Honor Harrington Franchise. I rounded the day out with Tactics 101 (wow, these guys take their fiction seriously!), and Building a Fictional Navy. This was particularly interesting, because it was being run by naval personnel former and current, and a former professor at the Naval War College. It was really interesting stuff.

I then attended another writing panel, this time on Taking Your Reader for a Ride. This was the first panel I attended with Eric Flint . . . who was AWESOME. Very down to earth and blunt, but also a giant in the field. A lot of practical help for new writers, as well as fun banter, insight, and a couple of behind the curtain stories. 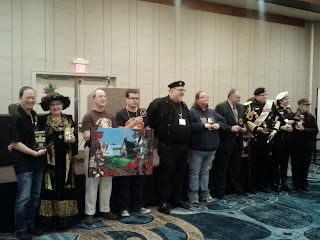 After the last panel of the day was the awards ceremony, where most of the organizers were given plaques (often a surprise, even to the folks organizing the awards), and David was given an admiral's beret in lieu of the full Royal Manticoran Navy  uniform they have commissioned for him. You could tell he was very moved by the gesture. Also receiving awards were the winners of the costume contest, the story telling contest, and the best over-all fan. A story I have to tell later, because it was really cool . . . in a really weird way . . .

After the ceremony I went out to dinner with Listener and Friend of the Show Fred Kiesche and Convention Toastmaster Chris Weuve at the hotel's Roost restaurant . . . delicious. And Fred was gracious enough to treat, and would not take no for an answer.

We ate and chatted late into the night, and I called it a night, returning to my lovely suite at La Quinta, the official hotel of the D6 Generation. :) 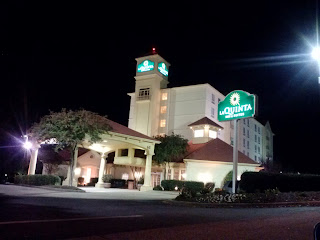 And now my flight is boarding, and I have to run!

The last day as soon as I can get to it.

As usual, thanks again for reading!

Posted by Craig Gallant at 1:27 PM