HonorCon Day 3 and Beyond

Anyway, Day 3 . . . I left the lovely La Quinta, tried to find a Dunkin Donuts and abandoned the search as I had a loosely-scheduled meet-up with Gena Robinson, David Weber's PA and Co-Chair of the Convention Council. I missed Gena, unfortunately, as I had horded one last copy of Honor Among Outlaws, hoping to give it to David as a token of thanks for years of entertainment, inspiration, and for making himself so available to us so often.

Missing Gena, I hurried to my next panel, Writing -- Baen Speaks: Writing from a Publishers Point of View. Again, the panelists were Toni Weisskopf, grand-pooba of Baen, Tony Daniel, publisher and author, and Laura Haywood-Cory. Eric Flint sat in again, as he now publishes his own magazine in addition to being a big-wig author. It was another GREAT panel. Seriously, these Baen folks know there stuff, but they also present engagingly with humor and warmth. If you ever have a chance to attend something like the Baen Traveling Roadshow or some other panel, jump at it!

My next panel was Writing -- Advancing Plot. Eric Flint, Tony Daniel, and author Chuck Gannon, speaking about things like outlining, flow charts, foreshadowing, etc. Chuck Gannon had a great term that I particularly liked: Pantsing, for writing by the seat of your pants, rather than using an outline. Turns out the professionals, whether they like to or not. have a similar opinion about outlines to mine, ie: they use them.

And that was the end of my panels. I needed to make my flight, return my rental car, etc. So I was unable to stay for the last panel I REALLY wanted to attend: The Trial of David Weber, where a panel of super-fans forced him to account for the many beloved characters he has killed throughout the Honor Harrington series. Now that I know a lot of these folks, I'm sure that was a blast. Maybe not as fun as "Airdropping Several Thousand Angry Treecats on Mesa" . . . but still fun . . .

I did finally track down Gena and David. He seemed genuinely touched when I gave him the copy of my book, and he wrote something VERY kind in my new copy of the Empire from the Ashes, the omnibus containing Mutineer's Moon, the first David Weber book I ever bought, more than 20 years ago . . . That book is currently now one of my prize possessions, and I do not lie . . .

I tracked down Chris, Fred, and several of the other friends I had made over the course of the weekend. I was even asked if I wanted to come back next year as a full-fledged guest writer . . . um . . . hell's yeah! :)

And so, rushed back to the Greenville-Spartanburg 'International' Airport . . . which is where I started the last post . . . so I think that was it! 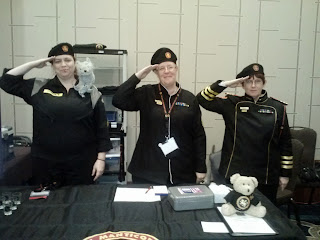 All in all, this was a great, extremely well-organized convention. Not huge, but then, I would never have wanted something like this to be huge. Each panel audience was about 20 or 30, except for the big events. I was able to sit close to the front each time, and felt like I was really talking with the guests. It was awesome. The venue, the Hyatt-Regency, Greenville, was beautiful and very futuristic, which was a fantastic backdrop to all the uniforms parading around all weekend. And speaking of uniforms, how about a picture of The Royal Manticoran Navy's Bureau of Supply, as a sample?

Anyway, that's about all I have to say about that . . . time to get back to work with my final revision (thanks to a timely delay at the other end) of Abundant Riches, the final book in the Jesse James Archive trilogy.

As always, thanks for reading, and goodnight!

~Craig
Posted by Craig Gallant at 9:11 AM