So, without a doubt, the Dwarven Forge Dungeon Tiles Kickstarter was my LARGEST pledge on the crowd-funding website so far. I have always loved Dwarven Forge's stuff, but always from a distance due to the ridiculous cost of any of their sets, and the sheer, daunting number of said sets needed to do a layout of any size. And don't get me wrong, I'm not saying those resin, pre-painted, AWESOME looking sets are unfairly priced AT ALL. Just that they were WAY out of my own reach, especially for something whose usefulness would be questionable, at best, with my gaming activity.

And then along came the kickstarter . . . I jumped right in. I went for the unpainted option, so I could get more stuff, and I knew that painting the terrain would be no big challenge for me. Of course, I was thinking skill-wise, not time-wise, but more on that later. I pledged for 5 sets, plus 4 add-on sets, for a total of $400 even. I figured, that would be about what I would pay for 4 sets of the previous Dwarven Forge stuff, but I would be getting basically 9 sets, plus whatever stretch goals were unlocked. I was good with that deal from the beginning, considering how long I had drooled over DF's stuff, so I was content, out of the gate.

Of course, the the kickstarter went crazy. Goal after goal was shattered, and because of the (ingenious) structure of the stretch goal rewards, I ended up with FIVE more sets that contained a ton of other bits and pieces, all of which complimented the basic sets amazingly well, and gave any sets a nice variety. So, for basically the cost of four of the original sets, I was getting FOURTEEN sets! That was awesome, with awesome sauce added, with a little sprinkling effing awesome on top.

Then I forgot about the kickstarter. My experience with these projects has been . . . spotty. Everyone seems to run a month or two behind their announced delivery dates AT LEAST, and I'm still waiting, more than a year later, for some stuff. And then, RIGHT on schedule . . . BAM! Two HUGE boxes showed up on my doorstep. Two huge HEAVY boxes . . . 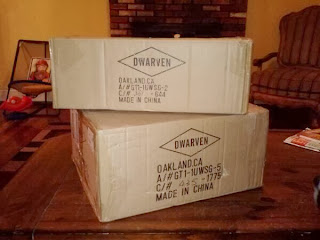 And that's when I started to doubt the wisdom of going for unpainted . . . because that was a LOT of stuff to paint.

But I buckled down and started to paint as best I could. I had opted for the specially-designed Pokorny paints and brushes, so my stuff would match any future painted pieces I bought, and I spent WEEKS of my vanishingly miniscule free time at night painting the tiles, the Dungeon dressing, etc.

Because, you can't have a dungeon without dressing, right? So, I got one set of the DF stuff, jumped in on another kickstarter for dungeon dressing (sadly, far more commonly, currently 2 months late, with no immediate signs of fulfillment), I bought a ton of scrap dressing from Iron Wind Metals at GenCon, and I found a company, now sadly out of business, that sold GREAT dressing online. They said, when they announced that they would be going out of business, that they would be selling their molds, but I have not found them available again yet.

Similar models are available Armorcast. And of course, I'm a big fan of Armorcast, always have been. And of course of course, they were, briefly, an advertiser on the show before they decided, with no hard feelings, that their advertising dollars were better spent elsewhere. Like I said, no hard feelings . . . but if you go over there to check it out and end up buying something, be sure to let them know you heard of them from us. :)

Anyway, so I finally finished painting (everything but the stuff that hasn't arrived yet, sadly), and as Russ says: Pics or it didn't happen. So I put together a layout, using slightly less than 2/3 of the tiles I now own, and took a few pics.

And so now, without further ado . . . my first Dwarven Forge Dungeon Tiles layout! 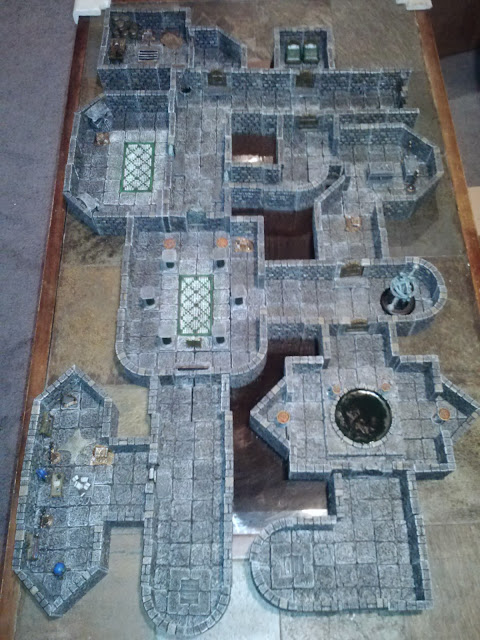 Here is the full layout, on my coffee table. I tried to get some of the variety allowed by the stretch goal sets in there, as well as some of the add-on sets additional pieces. So, you'll see a couple of the 'big' floor tiles, 4x6 inches. Following the example of the GenCon layouts, I opted to do the center 2x4 sections as a mosaic, but actually spent the extra time to paint a pattern within the existing mosaic structure of the models.

The lower right hand corner shows the pool from the special Chamber add-on, as well as some of the braziers currently unavailable.

I did run into some trouble trying to tie the two parallel structures at the bottom together, which led me to think that I might have to take some of my MANY MANY 2x2 floor tile pieces and cut them into 1x2 pieces to fix such an issue. 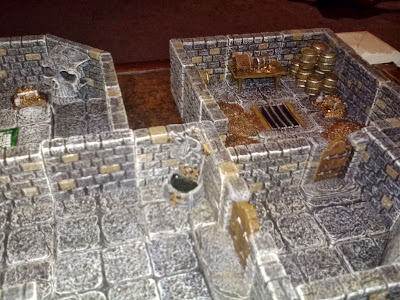 Here we have a vault, or treasure room, featuring the piles of gold from the stretch goal sets, the barrels from same, a table, a couple of boxes, and then some more treasure, some from Iron Wind Metals, and one piece from the Dungeon Dressing set from the Reaper Vampire kickstarter . . . sadly, the only pieces I have painted of that voluminous haul.

In the corner outside is a fountain from the Reaper set, and in the background can just be seen a skull detail, again from Iron Wind Metals, that gives the room a creepy feeling. 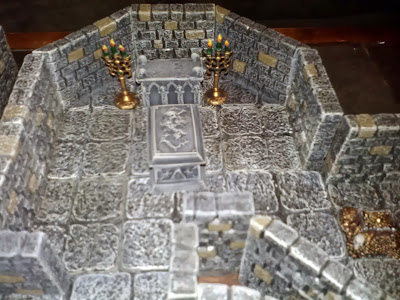 Down the hall from the vault is this crypt, built into a jink in the hall rather than within its own chamber. All the bits here are from the Reaper Vampire kit. I primed all my Vampire pieces with acrylic black paint, then used the Porkorny paints so they would blend with the rest of the dungeon.

The candelabra were painted gold and inked brown. I decided to provide what continuity I could by using my diminishing Dark Angels Green paint for most of the details, including these candles and the gems in the stands. In the corner is a 'treasure token', exactly an inch square, from Iron Wind Metals. 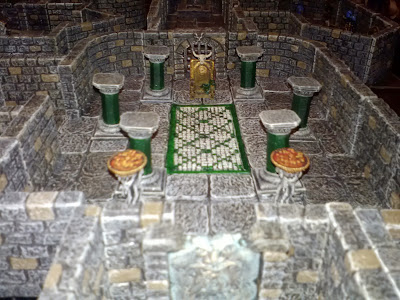 These pieces here were from what I think of as my Throne Room collection. The barbarian throne and the braziers are all from the now-defunct company. Too bad, too, because they had some AWESOME stuff.

Here again you can see that I continued to use the Dark Angels Green to provide some continuity, both on the stretch goal pillars, the details on the throne, and the floor mosaic.

The demon-head door at the bottom of the picture is an example of GW's new oxidized bronze technical paint. Watered down a little, it worked GREAT. 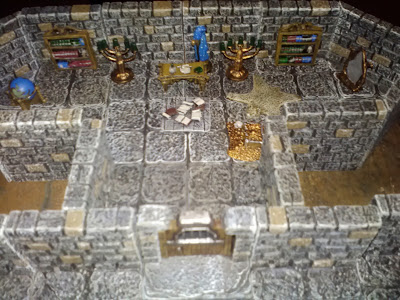 And here we have a whole bunch of my dressing from what I'm calling my 'Wizard's Room' collection, including the desk, bookshelves, a mirror, globe, even a coat rack with wizard's hat and robe. Again, you can see the same green.

You can also see another of the treasure tokens, and one of several floor tiles with built in details, in this instance, scrolls and books. In the forefront you can see one of the alternative doors that were available in the stretch goal sets.

And that's just a little bit of what I was able to do with my pledge for 5 sets of this awesome terrain, and not even using 2/3 of it! I intend to try to use this with our Iron Kingdoms Role Playing campaign if it ever gets up and running again, as well as, with a little tweaking, hopefully some Malifaux, and maybe even some futuristic minis games, with different dressing packs that I've got from Antenoceti's Workshop.

And of course, I might just be forced to come up with my own RPG opportunities to use this stuff, because it's just TOO DAMN COOL not to use! And as @TylerTinsley said on twitter . . . "until you game with it, it's just a creepy dollhouse." Which, to be honest, I think I'd be ok with . . .

Until I write again, thanks for checking in!